This Pigeon Forge music theater presents two different shows throughout the week. The entertainment is anchored by "America's Hit Parade," which takes audiences on a singing-and-dancing journey back through the greatest sounds of the '50s, '60s and '70s. From the early days of rock and roll to the groovy sounds of the Age of Aquarius to the funky beats of the disco era, this show has something for all ages, including Michael Jackson songs, a little bit of country and musical favorites. Each November and December, "America's Hit Parade: Tis the Season" gets folks into the spirit of the season with amazing lights, colorful sets and inspiring performances that celebrate the true meaning of Christmas through song. Both shows also feature a stirring military tribute to the men and women of our armed forces. 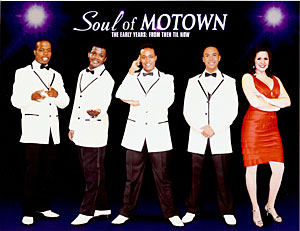 New at the Grand Majestic Theater is the "Soul of Motown" show, which is a fresh and energetic concert-style tribute to the legends of Motown. From live harmonies to the grooving dance moves, this supreme tribute reconnects audiences with the music of legendary acts like The Temptations, The Platters, The Drifters, The Commodores, Smokey Robinson and The Miracles, Sam Cooke, The Jackson 5, Marvin Gaye, The O Jays, Stevie Wonder, Lionel Ritchie, Boyz II Men, Gladys Knight and the Pips, Aretha Franklin, and Earth, Wind and Fire, to name several.